Thermal transmittance is the rate of transfer of heat through matter.  The thermal transmittance of a material (such as insulation or concrete) or an assembly (such as a wall or window) is expressed as a U-value.  As accredited energy assessors, understanding U-values is very important to us in helping building designers and users get the most out of their buildings.

Well-insulated parts of a building have a low U-values whereas poorly insulated parts of a building have a high U-values.  Losses due to thermal radiation, thermal convection and thermal conduction are taken into account in the U-value.  Although it has the same units as the heat transfer coefficient, thermal transmittance is different in that the heat transfer coefficient is used to solely describe heat transfer in fluids while thermal transmittance is used in a much wider range of circumstances.

U values are calculated using the equation: 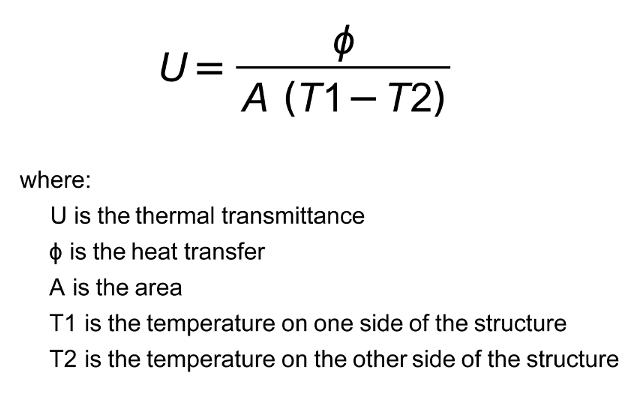 As with all calculations, it is important that all the values used are in the correct units.  To obtain a U-value in SI units, SI units must be used for all values i.e. heat transfer in Watts (W) and area in square meters (m2).  In this case, temperatures can be in either Kelvin (K) or Celsius (°C), providing they are both in the same units.